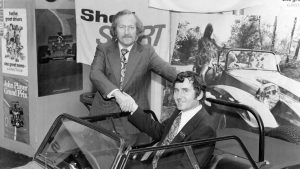 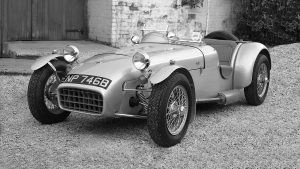 Back in 1957, a certain moustache championing master of mechanics known as Colin Chapman had an idea, an idea that would change how sportscars are approached for the rest of time.  A ‘fit-for-purpose’ sports car that would allow owners to experience the joy and pride of building it in their own home.

However, he was more than simply a mechanical master – oh no – he was a through-and-through petrolhead who knew his way around a racetrack. The home-build hero ensured that his lively little sports car could lock horns with some of the fastest cars in the world, and stuck firmly to his legendary mantra – ‘Simplify, then add lightness’.

Fast-forward to 1973, Mr Chapman’s business had grown, and he was moving over to creating more road-focussed, factory-built vehicles.

However, this wasn’t the end of the Seven. 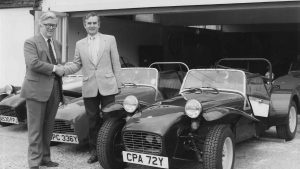 Caterham® Cars, a Seven dealership at the time in Surrey, based in the town of the same name, acquired the rights to continue to build and develop the Seven. This secured the future of what quickly became one of Britain’s most iconic cars.

The agreement marked the start of the first ever Caterham® Seven, and they haven’t taken their foot off the pedal since.

Over the years Caterham® have made waves in television and motoring media for rigorously sticking to a ‘light is right’ ethos, adapting the Seven to meet safety requirements, as well as moving with the times to use cleaner, more powerful engines. In addition to these, the chassis has also benefitted from updates (such as new size options, and modern suspension set ups). 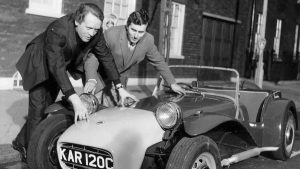 For the early Caterham® crowd, the Seven is famous for being the car of choice for Number Six in ITV’s 60’s TV series ‘The Prisoner’, starring Patrick McGoohan. Caterham® continued to make waves through the years, continuously returning to the screen to take on the world’s most exotic sports cars. In 2008 Caterham’s R500 famously snatched the crown from the £1 million Bugatti Veyron around the Top Gear Test Track and in 2017 Caterham took on the legendary Goodwood Hill Climb in the 620R, again sending supercars home with their tails between their legs.

Most recently, Caterham® released a throwback inspired model, the Super Seven 1600, celebrating the rich history of the first ever Caterham®. Flared wings, a spare wheel, a wooden steering wheel and new air filters – recreating the iconic engine notes from cars of the seventies.

Even with all the improvements to make Sevens more usable and comfortable, as well as lighter and much faster, the heart of Caterham® has remained firmly in the realms of motorsport. From breaking speed records in the 1990s, to wiping the floor with the competition at the Nürburgring in 2002, Caterham® has proven itself time and time again to be the masters of competitive driving.

In 1995 Caterham® launched its world-famous Academy Championship. A racing series which introduced those passionate about racing to the world of motorsport, providing the opportunity to learn the art of car control and become a fully-fledged racing driver. Since its inception, the Caterham® Academy has created over 1,000 new racing drivers and has sold out every single year. 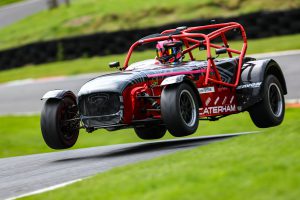 A typical season consists of Seven rounds across the UK, along with driver training and ARDs testing, meaning that by the end of the season the driver can whip their novice sticker off the back of their car and take on professional racing.

The Academy is simply a stepping-stone into the world of Caterham® racing. Today there are five UK championships available which cater to ever-increasing levels of ability and difficulty.

Following on from the entry-level Academy season, drivers can upgrade their car to what’s known as ‘Roadsport’ spec. A more intuitive set up which allows drivers who have ‘graduated’ from Academy to continue to hone their skills and take their racing career one-step further. After this, the competition really heats up.

Gone are the windscreens and headlights (on the same car used in the Academy), and in comes a little more power – this is now an out-and-out racer. Classed as a 270R, drivers begin to take more risks and the racing tightens up. However, if a driver wants even more power they can upgrade to the 310R championship – the top tier series for the 1.6 litre engines. 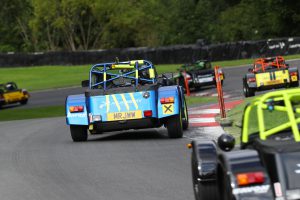 New for 2020, Caterham® introduced the only National Level Caterham® Racing Series – the Seven Championship UK. The crème-de-la-crème of Caterham drivers battle it out in specially designed 2.0 Caterham 420R’s with sequential gearboxes. It really is a bare-knuckle battle of talent.

As part of Caterham’s continued lead in racing, their technical team have become the go-to mechanics at race events. As well as providing support ahead of a race season (such as set ups, repairs and upgrades), their team of technicians are on-hand to ensure that everyone can get back on track and keep on racing. Much like a racing driver, a talented individual always performs at their best when they have the right tool for the job. 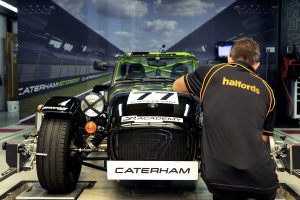 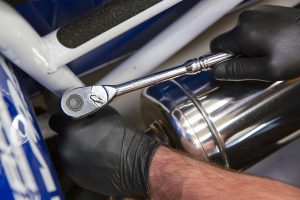 This year Caterham® has joined forces with Halfords Advanced, as the new official tool suppliers of Caterham® racing  – ensuring that Caterham’s hero technicians have everything they need to keep everyone on circuit… meaning that there is no shortage of exciting racing.