Throughout the towns, cities and countryside of the UK, lots of people are enjoying the amazing benefits of electric bikes – and trust us, there are lots of them!

As hard as it might be to believe, electric bikes have been around for over 125 years, with the American inventor Ogden Bolton Jnr. first introducing them in 1895. However, it’s only been in the last 10 years or so that the technology has really caught on and electric bikes have started to become a familiar sight.

If you’re not that familiar with e-bikes and want to know more, or you’re a bit sceptical about whether a bike with a motor constitutes as cheating, then this is the blog for you. Here’s why we reckon an electric bike is definitely worth the investment (and definitely isn’t cheating!). 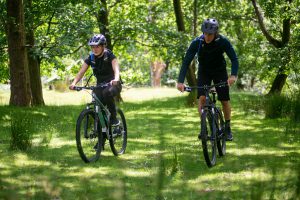 Where else could we start other than the fitness benefits?

That’s right, getting fitter is one of the many benefits of using an e-bike! A 2017 study by the University of Colorado Boulder revealed that volunteers who used electric bikes on their commute to work for a month showed an improved aerobic capacity and blood sugar control.

That’s because, although electric bikes do come with onboard motors, these motors are only there to assist with pedalling and don’t power the bike unless the rider puts in the effort too. While you might not hit the same intensity levels as you would on a regular bike, electric bikes are still a significantly healthier option than cars or public transport.

Not every cyclist wants to feel the burn when they embark on a steep hill climb, particularly if that climb’s part of a regular journey. Electric bikes can make things a lot easier as they give you the option to engage the motor and get some pedalling support as you tackle those tricky inclines.

The Voodoo Bizango and Carrera Vengeance e-bikes boast some serious pedal power, making an ascent feel more like a descent. So, you can get some exercise without being left with lead legs for the rest of the day! 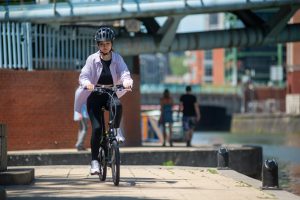 Electric bikes are a much greener option than a car or public transport as they release no tail-pipe emissions – so by riding one, you’ll be doing your part to help the environment!

But just how environmentally friendly are e-bikes? Well, a study by the European Cyclist’s Federation (ECF) calculated the full carbon footprint of different vehicles, accounting for everything from production to the extra food intake of cyclists (as you’ll be burning plenty of calories!). With everything accounted for, the carbon footprint of cycling was only 21 grams of C02e per passenger kilometre travelled, compared with 271 grams of C02e per passenger kilometre in a car. So, you really will be helping the environment!

4. You’ll be fresher when you arrive

Don’t want to arrive at work sweaty and exhausted from your ride? There’s no need to with the help of an electric bike.

Most electric bikes have multiple levels of assistance so you can choose how hard you work on a ride. So, if you’re a commuter or on a casual ride, opt for a high level of assistance and let the motor take care of most the of effort.

On those days when you want some heart-pumping exercise, click it down to a lower assistance level and enjoy a thorough workout.

The Carrera Crossfire is a great example with lots of resistance levels. It can assist your travel up to 15.5mph, while its drive system makes conquering hills an absolute breeze.

5. You can take your electric bike wherever you go

Electric bikes can also be the perfect portable option. Models like the Carrera Crosscity are foldable, which means that you can easily transport them in a car or on public transport if needed. This could come in handy if your journey involves a mix of public transport and cycling, the weather takes a turn for the worse when you’re out, or you’re in a particularly big rush to get somewhere.

And just when you thought e-bikes couldn’t be more convenient, lots even come with mudguard and pannier mounts. When it comes to riding in wetter conditions, you’ll appreciate the extra protection mudguards provide (and so will those riding behind you!). Pannier racks are a great way to carry extra things on your journey, whether you’re touring, commuting or simply picking up some shopping.

6. You’ll have no limits 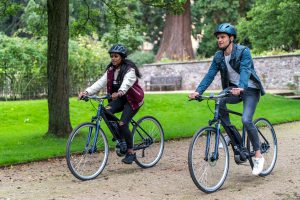 One of the biggest advantages of electric bikes is their accessibility – they cater for all abilities and ages and allow inexperienced riders to keep pace with more experienced ones.

The motor also gives riders the potential to cycle further without exerting more energy, opening up a whole new world to explore and providing more opportunities for exercise.

And the benefits of electric bikes don’t stop there as they can even save you money!

Most people commute by car, but that means paying for fuel, clean air zone charges, plus the other extras that go with driving like tax. With an e-bike, you don’t have to worry about any of these things, only the initial purchase of the bike and charging it.

So, how much does an electric bike cost? Well, probably less than you might think! Here at Halfords, we have a range of high-performing electric bikes for less than £1000.

Even better, at Halfords you can pay later with Klarna, so you can spread the cost of your purchase. And if you want to use an electric bike to commute, you can sign up to our Cycle2Work scheme which can save you up to 42% on the cost of the bike and any accessories!

So, whichever way you look at it, buying an electric bike is a great investment and can be a real money saver – as rising energy bills and the cost of living continues to bite, an e-bike could be a great long-term way to save money.

And there you have it – seven benefits of owning an electric bike. Convinced? Then head over to Halfords.com where you can find our full range of electric bikes from top brands including Boardman, Carrera, Pendleton, Raleigh and Voodoo.

You want to enjoy the amazing benefits of an e-bike, you want Halfords!