What if your old bike could help to change someone’s life instead?

Well, thanks to Re-Cycle and Halfords – it can.

Re-Cycle is a UK-based charity that specialises in providing affordable transport to people in Africa in the form of the humble bike. The charity collects old and unwanted bikes from here in the UK, gives them a thorough inspection and ships them to trusted partners in Africa for distribution.

Claire Kettle joined Re-Cycle in 2014 and became the charity’s director in 2018. “I was attracted to Re-Cycle because it’s a multi-purpose charity,” she explains. “It has an ethic of not only helping people in Africa with limited transport options, but also providing a service to the local community. And all of this is done through the simple process of bike re-use.”

In total, over 117,000 bikes have been shipped to Africa since Re-Cycle began operating in 1998. For Claire, the charity’s success lies in the strong relationships that it’s developed with partners both in Africa and here in the UK – and that’s where Halfords comes in. 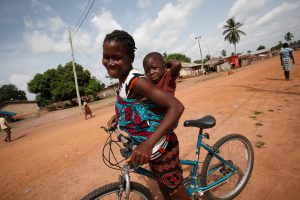 Halfords first teamed up with Re-Cycle in 2013. Since then, our amazing customers have donated almost 60,000 bikes to the charity. These bikes have been sent to The Gambia, Ghana, South Africa and Zambia, where they’ve really helped to make a difference to the lives of people who don’t have the same easy access to transport that most of us enjoy.

“Our partnership with Halfords is a vital resource that enables Re-Cycle to access donated bikes from across the UK,” Claire shares.

Once an old bike has been donated to Halfords, we’ll send it on to Re-Cycle’s UK headquarters in Essex.

“We have a small staff team of six part-time and full-time workers,” Claire says. “They’re the cornerstones of the charity and each performs a vital role. We’re also supported by a brilliant team of around 35-40 volunteers who help us to manage the many tasks in our day-to-day operations.”

Those tasks include collecting bikes, unloading deliveries, and assessing each bike for quality and suitability. Suitable bikes are then prepared for the long voyage to Africa and carefully packed into shipping containers to maximise space.

Any bikes that aren’t suitable because they’re too rusty or aren’t of a high enough quality are stripped for parts instead. These parts are also sent to Africa, along with any other essential items like inner tubes and spare tyres.

Once the bikes land on African shores, Re-Cycle’s local partners get to work. They run a number of bike projects on the ground, including refurbishing, distributing and maintaining the bikes they receive, and running bike maintenance workshops.

With almost 120,000 bikes making their way to Africa over the last two decades, there are a huge number of stories to tell. Here are just a handful of the ways that donating a bike to Re-Cycle can really change someone’s life for the better. 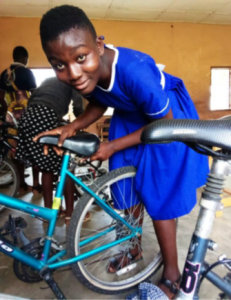 Aboagyewaa Patricia is one of five schoolgirls who lives on the outskirts of a small farming community called Anyima, in Ghana.

Up as early as 4.00am each day to carry out a variety of household chores, Aboagyewaa Patricia and the other girls were then faced with an 8km trek to school. They’d often arrive understandably late and exhausted, which was having a negative impact on their education and had even caused some of them to drop out of school entirely.

In October 2020, the Village Bike Project (Re-Cycle’s Ghanaian partner) stepped in and taught the girls to ride a bike, as well as basic bike maintenance skills. The girls were given their bikes to keep at the end of the programme and having a way to commute to school has led to better attendance, better performance at school, and (most importantly) happier kids.

“With my bike, I’m comfortable travelling around and I no longer get into trouble for being late to school,” Aboagyewaa Patricia says with a smile. “I’m grateful to the bike donors and I hope others facing similar challenges receive similar support.” 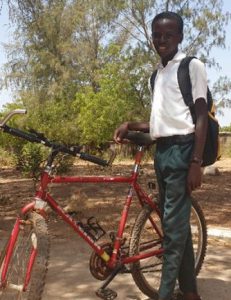 It was a similar story for Babacarr, a 13-year-old from rural Gambia. Babacarr attended a school that was 6km away from his home and had to face a 1.5 hour walk each day – a walk that often began in the dark in the morning and ended in the dark in the evening.

In 2019, Babacarr received a bike as part of the Cycle to School programme run by Re-Cycle and The Wonder Years Centre of Excellence (WYCE). This has cut his daily journey down to half an hour and means he no longer has to worry about travelling in the dark or being late for school.

Looking to the future

Like many other charities and organisations, 2020 was a difficult year for Re-Cycle due to the ongoing pandemic. Donation levels fell, the number of volunteers had to be reduced and the volume of shipments to Africa was less than the charity had planned.

Despite this, Claire is upbeat about the future and what 2021 has in store. “We’re hoping to be able to secure many more donated bikes in 2021,” she shares, “particularly with the [UK] government initiatives to promote cycling, the renewed interest from the public and with the help of selected Halfords stores as drop-off points.” 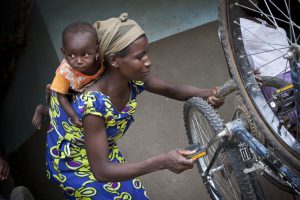 All you need to do is bring your old bike along to one of the 70+ drop-off points at Halfords stores here in the UK (you can find the full list of eligible stores here). One of our in-store colleagues will be happy to take it off your hands.

It doesn’t even matter what condition it’s in; Re-Cycle and their local partners are experts at giving old bikes a new lease of life (and stripping parts from those that are too far gone).

So, what are you waiting for?

To find out more about Re-Cycle, the partnership and how you can get involved with this great cause, check out our Re-Cycle hub.